Today I met one of Beehive's friends who has a booth at the Union Square Holiday Market.

He thought I was Beehive's SISTER.

Funnily enough, I don't think this is the first time someone has mistaken us for brother and sister.

I can't imagine why. 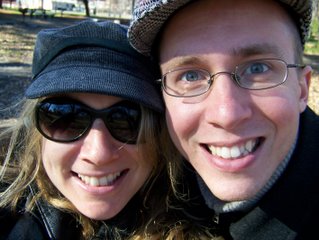 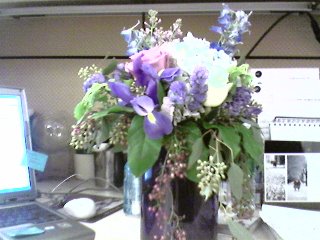 I always joke that whenever I make my yearly trip to the gyno, I deserve dinner, or at least some godamn flowers, for all the violating that takes place.

The above flowers are NOT from my gyno, but rather from a certain Beehive, who was feeling a bit sickly this morning after a night of mixing cocktails on an empty stomach.

I'm happy to report that I was indeed a very good girlfriend, and nursed my boy back to health last night, making sure that he did not choke on his own vomit or crack his head open while passing out on the bathroom floor. I was on hand to pile on the blankets when he was freezing, and to remove them when he was burning up.

At one point, he was lying on the floor, completely naked, half asleep. He wouldn't let me move him, so on the floor he stayed. I snuck a peek, quite inappropriately during his drunken strife, and damn if I didn't become slightly aroused at the sight. The date rapist in me started imagining all of the things that I could do to the hotness that laid on my bathroom floor. Thankfully, he started barfing again, snapping me back to reality.

Get 'Em While They're Young

Falling asleep on the couch last night, the boy and I were half-watching The 40 Year Old Virgin on HBO. Steve Carell is about to learn the hard way that he doesn't know how to use a condom.

Won't You Be My Neighbor

When I moved into my new apartment,9 months ago, the boy and I christened pretty much every room in the place. Including the kitchen floor. Sans curtains. Windows open wide. Lights on. Might I add, many of my windows face another building, in which if I reached out to touch my neighbor, I could actually grab him by the scruff and pull him in to join the sordid festivities, if I so desired (for the record, I don't desire).

I do fancy myself an exhibitionist of sorts, but I am not thrilled at the prospect of my neighbors seeing and hearing every move I make, especially of the sexual variety. I have been meaning to purchase blinds for months now, but somehow this proves to be more frustrating to me than trying to solve an algebraic equation.

I have since gotten new neighbors across the way, and my intention was to get blinds BEFORE they witnessed any of my sexual acrobatics, so that we could start off on the right foot, and if I saw them on the street, I wouldn't have to run and hide in shame.

Of course this never happened. And so, last night, while woozy from the weekend and chilling with Beehive watching football, I started to get randy on the couch. Before the poor boy knew what was happening, I was straddling him, and bra and t-shirt were being pulled off and thrown around the room like confetti.

I wanted him on that couch, and nothing was going to stop me.

"Lemme go turn off the lights" I purred as I slithered off of him, covering my tits with his white t-shirt. As I reached down, in front of the window, to turn off the lamp, I look up and see my neighbor, sitting in the window, looking right at me. And there I stood, frozen, my tits only partially covered, my pants unbuckled and about to slide down to my ankles.

We decided to forgo the couch and snuck over to my bedroom, where the frolicking continued.

This morning, I took out the garbage, and there was my lovely neighbor, standing out on his stoop, smoking a cigarette. Wouldn't you just know, as I opened up the lid of the trash can, a gold foil Magnum condom wrapper flew out of the bag and landed right at his feet.

I've never been a smoker in the true sense of the word. I would bum one here and there from someone outside of a bar, or if I was feeling really naughty, I'd buy my own pack and stick them in a drawer...pulling them out as needed. A pack could usually last me a week or more (yes, I have been known to smoke stale old cigs. After a few vodka tonics, you just start to not care!)and sometimes I would even forget that they were there.

Two or three weeks ago, I was going through some personal stress, and the first thing I did was start smoking. I sat in my apartment one day and just sucked down those babies one after the other until I couldn't stand the scent of myself. My own sister, who smokes a pack a day herself, walked into my apartment and choked. "What the fuck is wrong with you?" she spit as she readjusted her gas mask.

I wish I knew.

For now, dear friends, I have become a smoking fiend.

Of course, I think I'm being all sly about it. I sneak out at work and walk out the side door, where none of my coworkers will see me, lest they actually find out I smoke (cuz, you know, they can't smell it on my clothes or anything). I shove one into my mouth as I'm walking from point A to point B, because if I'm walking, it doesn't count!

This morning, as I did a pseudo walk of shame from the Beehive's house, I lit one up as I exited the subway to go back to my apartment. It wasn't even 9am...and because I am not a "real" smoker, I have forgotten the wonderful side effects of a morning puff--instant laxative! I found myself three blocks from my house and a dire need to poop..so not only am I disgusting, I am also about to shit my pants.

I think it's time to quit.

My latest fear is that I will stroke out in the middle of puffing away one night, and my decaying corpse will be found weeks later, the poor cat having eaten half my face off, a half smoked pack of American Spirits at my side. 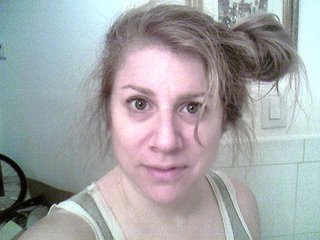 I woke up this morning in a complete haze. This haze was caused by a multitude of things...too much red wine with Lesty....crazy graphic dreams, probably caused by aforementioned red wine...and my goofy cat waking me up every five minutes or so.

Above picture is me, and how I looked upon waking up this morning. Check out that cool 'do. Don't you wish your girlfriend was hot like me?

At any rate, due to the fact that I was in a fog this morning, and in a hurry to get to work, I pulled on some clothes that were sitting in a pile on my dresser. Nothing to get too excited about...a black top, jeans, and some boots to complete the outfit. My usual "i dress like i'm not going to work" look.

Tossed on my puffy jacket (sans cupcake frosting, thank you very much) and was off.

At some point during the morning, I needed to pee, and was thankful for a reason to get up from my desk. I sauntered through the halls, and was perplexed at the attention I was garnering from men in the office that don't normally think I'm all that, or who never really feel the need to say hello to me, etc.

I opened the door to the bathroom and in the full length mirror I saw exactly what was causing all the broohaha. It was most indeedy the low cut, backless number I had thrown on in my sleep coma. This is a top that most definitely should never make an appearance in the office. I do believe that this is a top that I wore on my first date with my current BF, the one that is not only severely low cut, but also see through.

I scurried back to my desk and thankfully found a hoodie hanging from the back of my chair. That fucker slid on quite nicely, and I zipped it up and went about my day, as if I hadn't just flashed my tits at the president of my company, and everyone else in between.

Note to self...get some fucking SLEEP at night!!!!

Edited to include a fairly recent picture of me, all nice and cleaned up. A girl's got SOME pride, you know!

There is nothing worse than sitting at your desk, minding your own business, when suddenly you are hit with the BIGGEST desire to have mind-blowing sex, and it can't wait. You need it, and you need it NOW.

In an instant, I am overcome with the most OVERWHELMING bout of horniness, the likes of which you do NOT want to be experiencing while staring at your computer in the middle of the workday.

All I want to do is take care of the problem. I want to run into the women's bathroom and lock myself into a stall and rub one out. Oh God how I wish I could do that! Unfortunately, I am not one of those women, and the last thing I need is for someone to walk in while I am in the midst of having the Big O. I think that would be slightly more horrific than being caught having a good cry in stall #4.

I'm trying to think about anything, ANYTHING other than what is going on in my crotch right now. It's not easy.

Strolling hand in hand through the Brooklyn Botanical Garden with my boyfriend, we were accosted by two women with a digital camera. "Excuse me" they called after us...we expected them to ask the usual "can you take our picture", and then I would do that thing I do...grab the camera out of their hand with a slightly annoyed expression and act like I'm doing them the BIGGEST favor on earth.

"We're making a video for our friend's wedding shower," the one holding the camera said. "We were wondering if we could record you giving out wedding advice to our friend."

The women looked at us and tried to hide their amusement. "Well, could you at least give out some relationship advice, thoughts, anything?"

Beehive and I looked at each other, and I stammered, "We are not in a position to do that right now" and we tore off.

I've Been Doing This a While

i like cheese
NY, United States
I'm "that friend", that always tells it like it is. Some love me for it, others want me killed. I can deal with that.

Blogs You Should Read Cuz They're Dang Good